Hope for the Thinking Christian: Seeking a Path of Faith through Everyday Life 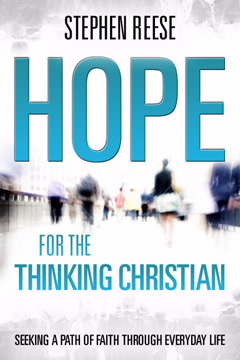 In this book I reflect on my own spiritual life and wrap it within a broader conversation about the role of religion and faith in modern society. In that respect, it is a form of journalism, as I take these highly personal reflections, developed over the course of several years, and express them publicly in a way I hope others will find accessible. Although distinguished from my other writing, I consider this project an extension of my scholarly imagination. For reasons I describe in the book, it's the most difficult kind of writing I've ever done but, in some ways perhaps, the most important and rewarding.

Where does the thinking Christian fit in the Body of Christ and community of faith? That question has become more critical as the world-wide call of fundamentalism has encouraged a style of absolutist belief, tribalism, and self-righteousness at odds with tolerance, community, and a rewarding life of the spirit. Meanwhile, in the communities of our daily lives--whether work, home, or family--diversity of belief has become more the rule than the exception. Surveys show that the ranks of the unaffiliated believers have grown, especially among young people, and Americans are less likely than ever to follow the faith tradition they were raised with-to have their beliefs handed to them. That makes it all the more important that we think the faith journey through, rejecting false absolutes in favor of tolerance and openness to the grace and mysteries of God in daily living. In this book the author opens a dialog with Christians and other thoughtful believers who hunger for a rewarding spiritual life but have difficulty getting past both the fundamentalist rhetoric and the secular alternative, with its often anti-religious response. In working through his own response as a thoughtful believer to the question "Where do I fit?" he engages this dialog at the intersection of theology and personal spirituality. These devotional reflections explore the faith journey we all take through "everyday life," confronting the challenge of staying spiritually intentional in a busy world of demands from work and family. The author explores the special difficulty faced by men in being vulnerable and open about their faith and inner life. Paul's message of God's "power made perfect in weakness" describes a basic principle of Christian discipleship, but the false certainties of belief, politics, and professional competence, make living that principle difficult.