Skip to main content
School of Journalism > News > Pulitzer Prize-winning photojournalist: 'What we do in this profession matters'

Pulitzer Prize-winning photojournalist: 'What we do in this profession matters' 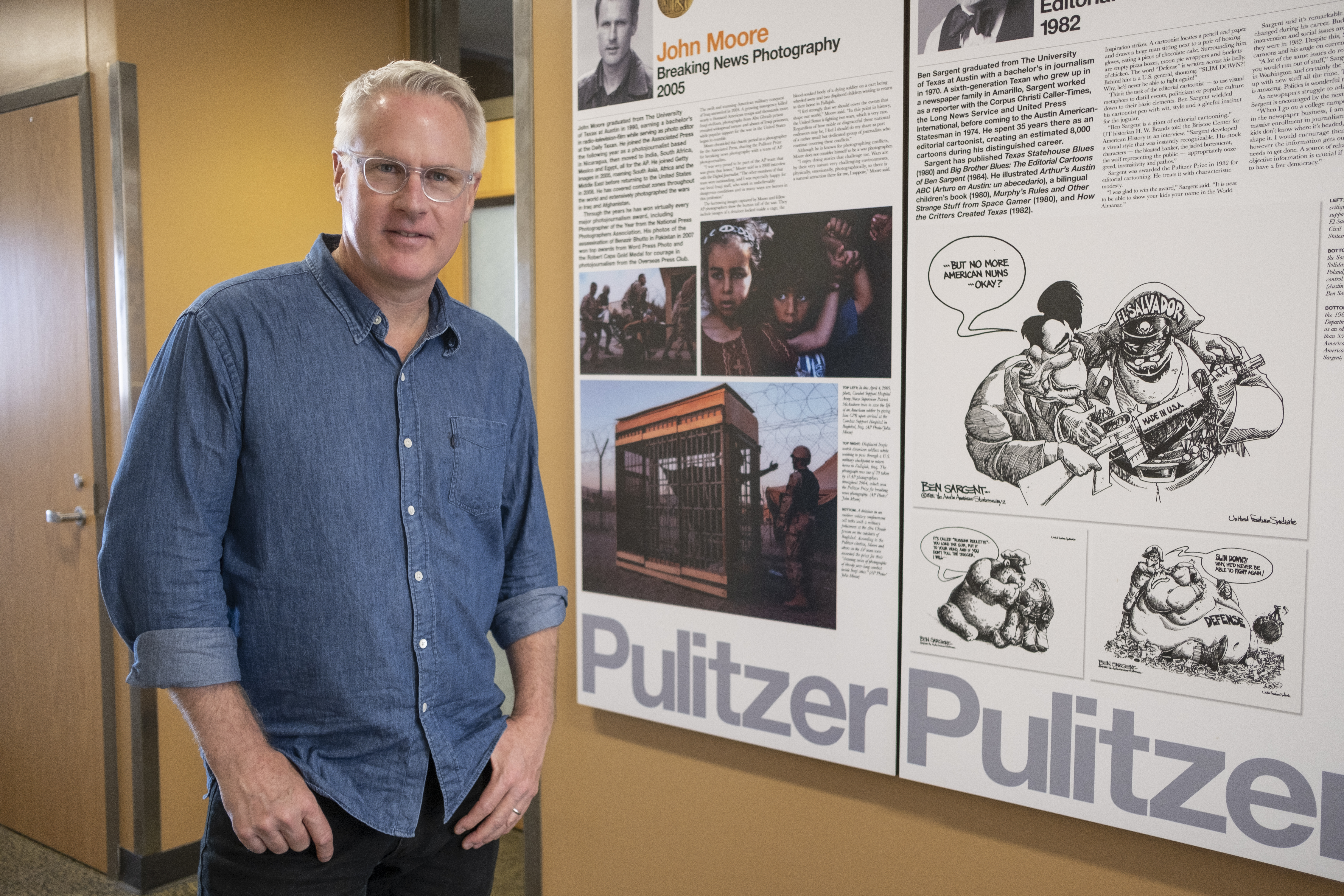 From behind a lens, John Moore has covered everything from political assassinations to Border Patrol arrests to famines.

The Pulitzer Prize-winning documentary photojournalist and UT alum gave a talk at the Belo New Media Center Monday night, where he spoke about a decades-long career that has taken him to the farthest reaches of the world and garnered international acclaim.

“People ask me how I photograph these difficult situations... people on the worst day of their lives,” Moore said. “I really do believe that what we do in this profession matters and that is in some ways a shield.”

Shortly after college, Moore started his career covering South and Central America for the Associated Press. Along with news coverage of the unrest in many of these countries, he profiled daily life at weddings, in crowded cafes and along busy streets.

Today, Moore is a senior photographer and special correspondent for Getty Images. Recently, Moore’s photo of a crying 2-year-old girl watching her Honduran mother get detained along the United States-Mexico border last summer went viral and sparked renewed outrage for the Trump administration's family separation policy. A version of the photo appeared on a Time Magazine cover later that summer.

Moore now focuses his attention primarily on covering immigration across the United States-Mexico border, a complex issue. But it’s a task Moore is well-equipped to handle.

One of his first early assignments was covering famine in Somalia, where the instability of the region meant he frequently needed a “truckload” of armed escorts.

In 2007, Moore was in Pakistan covering the return of the exiled Pakistani prime minister, Benazir Bhutto. After hours on stage covering Bhutto’s speech, he decided to leave. But he had not gone far when a succession of shots, followed by a suicide bombing, set off mass panic. Bhutto and 24 others were killed in the attack.

Moore made a snap decision and went back into the fray. He grabbed his camera and managed to capture photos of the chaos, even when threatened with a stampede.

“As a journalist, I never anticipated covering one of these events up close,” Moore said. “I never wanted to. I just happened to be in the place where it happened, and I was fortunate to get out.”

In 2014 he covered the Ebola epidemic in Liberia, which he first heard about while vacationing with his family.

His pictures of the crisis are wrenching. One shows a small boy curled up in the corner of a room. He later died, Moore said. In another photo, Liberian workers cremate the bodies of the infected. One series documents a woman’s grief as her child is taken away to be cremated.

“The things we see along the way, we can’t predict,” Moore said.

All of this experience has led to Moore’s documentation of the crisis closer to home: the contentious topic of immigration across the United States-Mexico border.

Moore had been covering the border for years but decided to create a book immediately after he heard the results of the 2016 election. Soon, “Undocumented: Immigration and the Militarization of the United States-Mexico Border” was born.

A recurring theme throughout the book is sets of headshots from the many stakeholders in border politics. Moore takes a portable studio around and photographs the different groups involved, from gang members to undocumented immigrants at different stages of their journey.

"The goal has always been to humanize this very broad issue and tell it from as many angles as I could," Moore said.

The book is split into eight parts, each one focusing on a different part of the border crisis. The first chapter, titled Origins of an Exodus, focuses on the reasons people leave their homes for the United States. Poverty, violence and climate change are the major push factors driving people from their homes, Moore said.

There are multiple aspects of the border crisis, according to Moore. Some of the book delves into the workings of the governmental agencies in charge of the border and the lives of the people who guard it.

The decision to include the government's point of view was purposeful.

"I may have my personal opionions on immigration and the different policies I've seen," Moore said. “But I prefer to let the pictures do the talking and show all different sides of the story and let people make their own conclusions.”

Moore said complete objectivity is a myth, as journalists cannot completely remove their private experiences from the equation. But the important thing is to be “fair to the facts,” which can lead to trust.

This method has allowed him to maintain access to U.S. governmental agencies, even when they are not portrayed in the most flattering light.

“It’s amazing how much access you can get by being straightforward with people and not taking a position on their story,” Moore said. “I don’t go into Border Patrol and say, ‘Hey what you guys are doing is great.’ I don’t say what they’re doing is terrible either. I say, ‘What’s happening here is important and I think it’s a story worth telling.’ When people that you’re photographing feel that you've made an honest attempt to be fair, then they will give you the benefit of the doubt.”

And above all, Moore said he sees his camera as a force for good.

"I do believe that we can have some impact in what we do," Moore said. "Every day, I go out with my camera and I want to change the world. I'm usually disappointed. But once in a while, we can, at least a little bit."