Skip to main content
School of Journalism > News > Texas Connect, a Magazine for UT Faculty and Staff, Is Launched

Texas Connect, a Magazine for UT Faculty and Staff, Is Launched 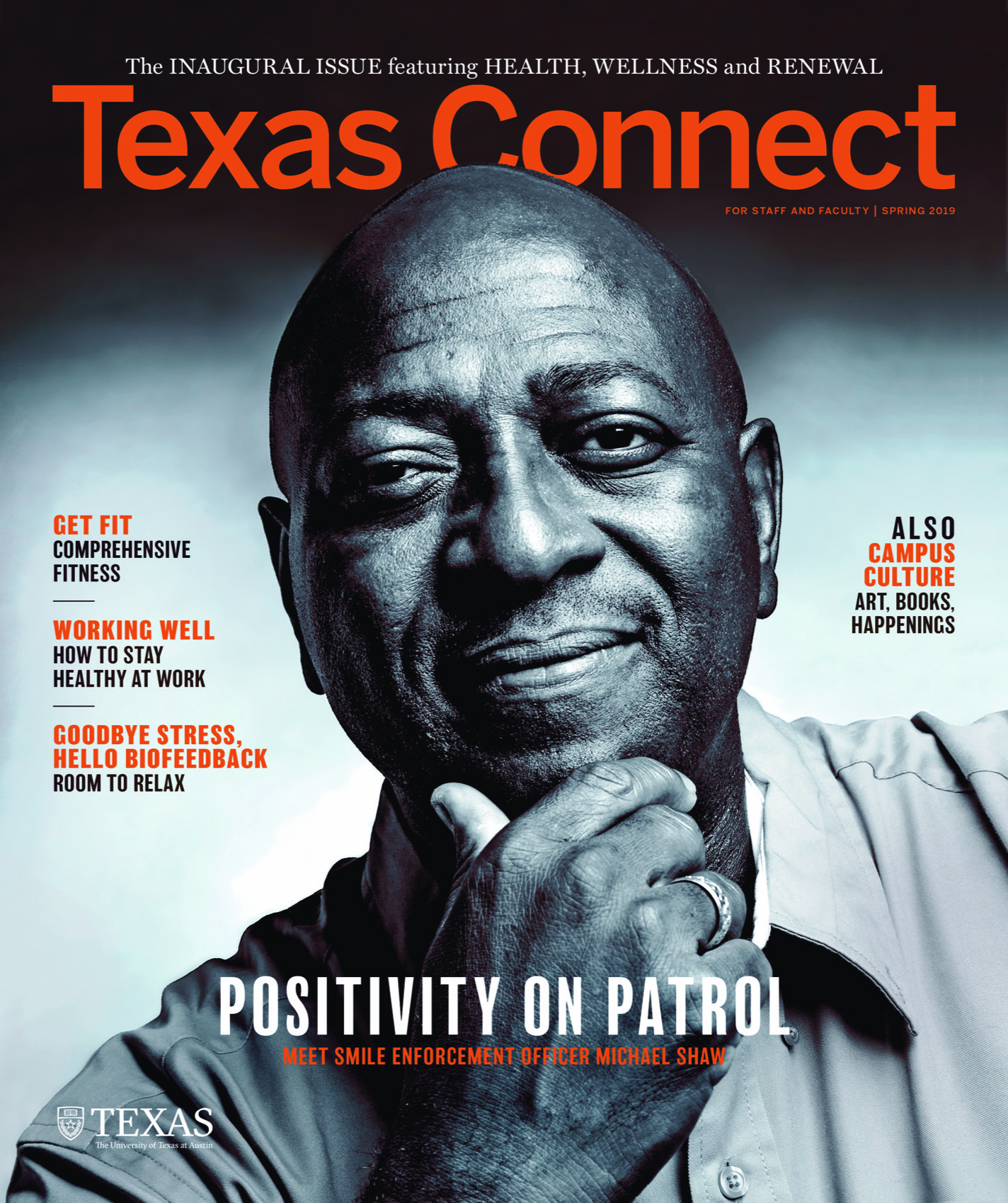 From bustling Guadalupe Street to grand Darrell K Royal Stadium (and everywhere in between), the University of Texas packs nearly 26,000 employees into around 431 acres.

In fact, UT can often seem like its own city in the heart of Austin, with hundreds of offices and departments scattered across campus.

To reach across that divide, employees at Texas Student Media and the Office of Internal Communications recently created Texas Connect, a magazine geared towards UT faculty and staff with the goal of uniting the university’s permanent population.

“We are so big...it's really hard for me to know what's happening across the hallway, across the street, definitely across campus,” said Gerald Johnson, co-publisher of the magazine and director of Texas Student Media.  “And after spending time with some city magazines I thought, ‘We’re kind of a small city here.’”

Less than a mile away in the Office of the President, Director of Internal Communications Cindy Posey had been thinking along much the same lines for a while.

“One of the things I’d thought about for years was an internal magazine, just for faculty and staff... focused on closing the gaps between the “silos” at UT,” said Posey, co-publisher of Texas Connect. “And it just so happened that Gerald had the same idea.”

From that beginning in spring 2018, Texas Connect celebrated the launch of its first edition late last month. The magazine is chock-full of articles centered around health, wellness and renewal, in-depth profiles on an array of faculty and staff, and lists of notable events or fixtures on campus.

Johnson said the magazine, with its “Texas Monthly” vibe, has “rich, compelling stories and beautiful imagery” alongside hopefully permanent features like the Back 40, which highlights curious or notable people and items around campus that may not be known to a wide audience.

And it is produced by, among others, School of Journalism interns. One such intern is Carlynn Hickenbotham, a recently graduated Moody alum and one of the spring issue’s main contributors.

Working for a magazine like Texas Connect was unlike any other journalism-related work she’s done, with much more flexibility and creative expression, Hickenbotham said.

“We were in charge of creating this sort of whimsical, but still relatable, but still professor-level language that we could use,” Hickenbotham said. “It was the first time I’ve set the pace of something like that.”

Of 10 full articles, Hickenbotham wrote five. Her personal favorite is a piece on creative office spaces.

"I even kind of went way too out there sometimes,” Hickenbotham said. “Every meeting I had five million things I wanted to do...I had to rein myself in.”

Sahar Chmais, a journalism senior, was an editorial intern with Hickenbotham. She wrote the cover story, a profile on parking enforcement assistant and “smile enforcement officer” Michael Shaw.

She said one of her biggest challenges with this first issue was the lack of databases and references she could use for ideas on finding and structuring articles.

“We were trying to figure out what direction we want it to go in, how to make it suitable for a spectrum of audiences,” Chmais said. “And there are so many things to look at on a vast campus. You go on the New York Times website and say ‘Oh, I wonder how we can do this in Texas or in Austin,’ but there was no reference for this. It was a first-of-its-kind sort of magazine.”

But the process of seeking out those stories changed her perspective on faculty and staff, she said.

“There is a huge number of these employees, and looking at how much they do for the university–it was insane, in an awesome way,” Chmais said. “Seeing their work and the support they give each other suddenly created the idea of this huge community. Not a student community but an employee community.”

Including Chmais and Hickenbotham, five interns--with various editorial, advertising and photography experience–were paid and received school credit for nearly seven months spent producing the first issue. It was a “win-win-win,” according to Posey.

A quick flip through the magazine will reveal glossy, carefully created spreads, precise photography, and an explosion of color. It’s an irreplaceable experience, Johnson said.

He said Texas Connect could have just as easily been an electronic newsletter, targeted content without the hassle of getting a brand-new magazine into circulation. But the choice to create something tangible was a purposeful one.

“We wanted to make something people could read at their leisure, they could take with them,” Johnson said. “We didn't just want an HR newsletter.”

Advertisers seeking a corner on the University’s niche market agreed. Texas Connect paid off all production costs and generated a profit of $4,000 through advertising revenue, according to Johnson.

Though the magazine is currently set for semesterly publication, Johnson said he could see bumping up production to 4 times a year. But it’s far too early to tell, he said.

And as for now, you can expect to see Texas Connect issues in all offices and departments across campus at least once every semester.

“It’s a hard thing to do, but then nobody’s ever really attempted it,” Posey said. “I said ‘I want to try to bring us together somehow’ and I think the best way to do that is to tell stories. Our students are amazing, they do amazing work.... but all of that is supported by staff. Their stories need to be told.”