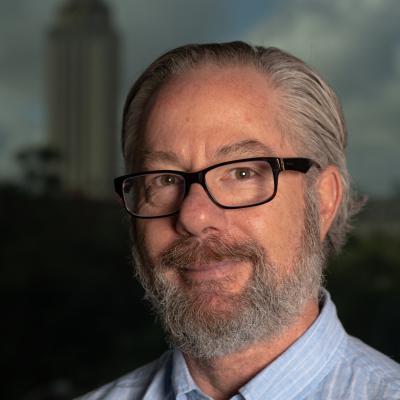 David Ryfe is the Director of and Professor in the School of Journalism and Media at The University of Texas at Austin. During his career, he has published widely in the areas of presidential communication, political communication, public deliberation, and the history and sociology of news. These days his work mostly concerns the ongoing disruption of American journalism.

His book, Can Journalism Survive? (Polity, 2012) presents the most sustained ethnographic study of American newsrooms in a generation. His answer to the question raised in the book’s title is that journalism is and will survive but will adapt in ways that change both large and small elements of the practice.  His most recent book, Journalism and the Public (Polity, 2017) explores the many ways in which journalism is shaped by the particular configuration of public life in which it is embedded. This fact is why journalism everywhere around the globe shares a family resemblance but is nowhere practiced the same.

His current work (Local News in a Digital Age, forthcoming) involves a study of eight news organizations located in a large Midwestern city.  In this study, he is interested to learn the current state and near-term future of local journalism. Previously, Professor Ryfe served as director of the School of Journalism and Mass Communication at the University of Iowa. In his 10+ years as an academic administrator, he has worked with faculty and staff to help prepare the next generation of journalists to thrive in the rapidly changing industry of journalism.