One hundred years ago, a journalist was born. A feminist was born. A woman who made a difference in Texas and national politics was born. A proud graduate of the School of Journalism and Media was born. 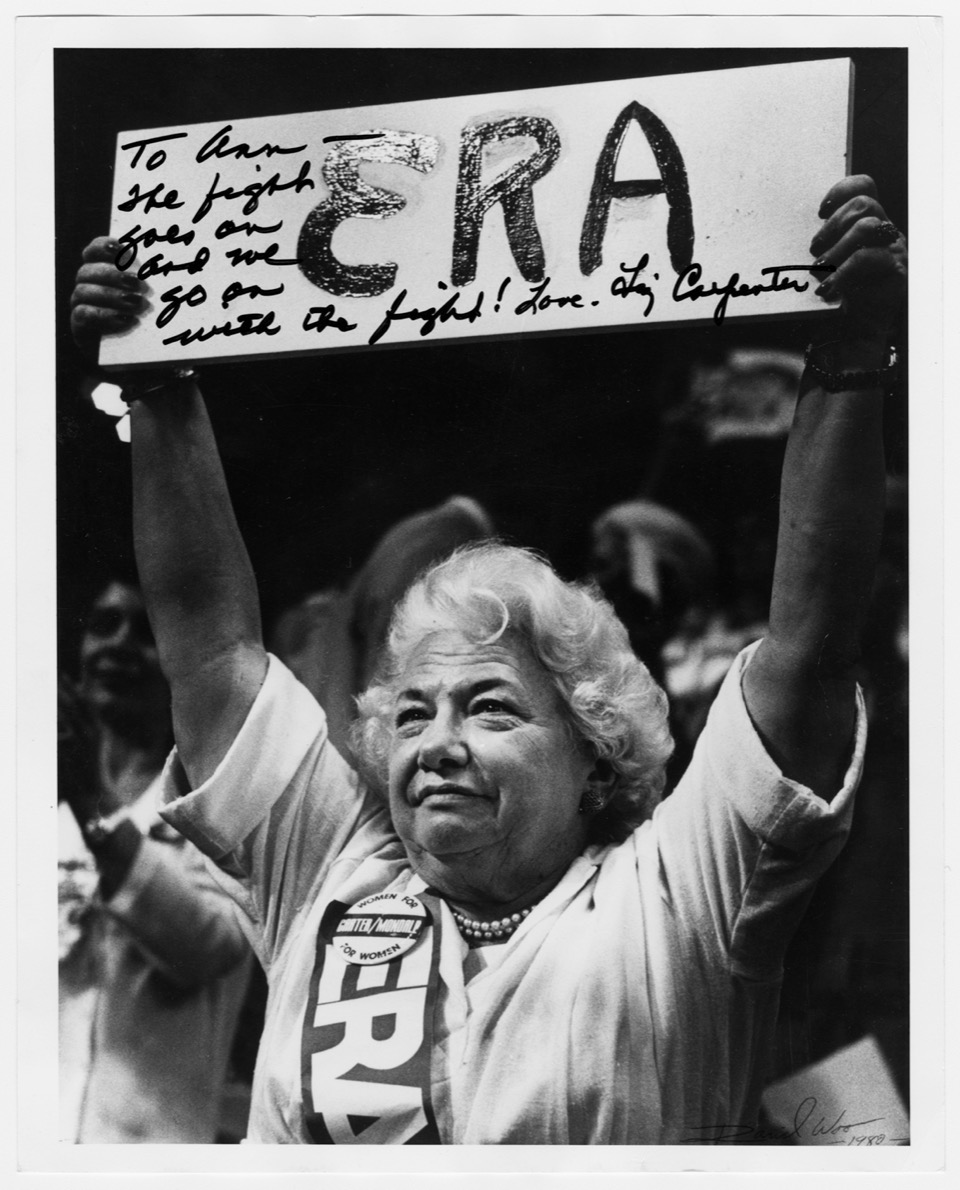 Liz Carpenter was all those things, and more. She was born in Salado, Texas, on Sept. 1, 1920, a fifth-generation generation Texan who counted among her forebears a Texas Declaration of Independence writer and another who died at the Alamo (after her death at age 89 in 2010, her New York Times obituary got a couple of details wrong).

As her daughter, Christy Carpenter, recently told the Austin American-Statesman: “The fact that my mother was born just five days after the ratification of the 19th Amendment has always struck me as no coincidence. Feminism was in her DNA, and sisterhood came naturally. Beginning from my childhood, she would tell me with great pride that we descend from women of grit — smart, educated and gutsy women — who supported the 19th Amendment in a variety of ways.”

After Carpenter earned her journalism degree, according to a positive Washington Post review of her 1987 book, “Getting Better All The Time,” her first assignment as an American-Statesman reporter “was to interview Texas's Democratic National Committeewoman in her room in the Driskill Hotel. ‘I had never been in a hotel in my life," writes Liz, ‘or even walked through the lobby without my father. You didn't want to be seen there in those days; hotels had a negative connotation.’ She found the committeewoman smoking and drinking. It was the first time Liz had ever seen a woman smoke, except in the movies, ‘and I had never been around people who drank, not even eggnog at Christmas.’ But there would be many more smoke-filled rooms and they would supply ‘some of the best times of my life,’ she tells us, but unfortunately without elaboration.”

The linkage between the suffragists, participants in the women’s movement, and today’s activists is clear. In fact, every generation of women stands on the shoulders of the ones that came before.

The Times wrote Carpenter “spent much of her life working the corridors of power in Washington as a newspaper reporter, an aide to Lyndon B. Johnson when he was vice president and press secretary to Lady Bird Johnson during her years in the White House.”  She and her husband, Les, formed the Carpenter News Bureau in Washington. Christy Carpenter points out the bureau covered the federal government for a dozen newspapers, including  The Houston Post, Arkansas Gazette, Tulsa Tribune, Boston Herald Traveller and Variety.

Christy witnessed her mother becoming “one of the leading crusaders for adoption as co-chair of ERAmerica,” but the amendment guaranteeing equal rights for women fell three states short of its goal. Christy has written extensively on her mother’s involvement:

"After logging thousands of miles and putting every ounce of her formidable energy and political savvy into the fight over six years, the loss was hard to bear. Yet, mindful of the lengthy road to suffrage, she never lost hope that the ERA will eventually be adopted.

"Progress in achieving our nation’s ideals has never been accomplished smoothly, or without set-backs, but it moves along a continuum, with generations of women passing the baton to the next.  I’m proud my mother picked up the baton of our ancestors and carried it proudly across the nation in a marathon quest for equal rights that continues today. As I consider the 100th anniversary of her birth and the Nineteenth Amendment, I envision her cheering the promising efforts currently underway to revive to ERA as well as the diverse rainbow of women who increasingly populate the Congress, statehouses, and city halls. At the same time, I can sense her rage as she watches ongoing efforts to suppress the vote.

"The linkage between the suffragists, participants in the women’s movement, and today’s activists is clear. In fact, every generation of women stands on the shoulders of the ones that came before. So now that we have reached this hundred-year milestone, let us embrace their legacy, courage and vision as we make the kind of “good trouble” that can carry us over the finish line of full equality and unfettered universal suffrage."

In 1991, Carpenter was named one of Moody College’s Outstanding Alumni, where she was described “as a trendsetting journalist, author, feminist, humorist, speaker, political adviser and party-giver par excellence.” The Liz and Les Carpenter Scholarship is designed to help students interested in investigative journalism.

Carpenter worked relentlessly during her 89 years. The Times quoted her as saying: “ ‘It never occurred to me not to work,’ Ms. Carpenter said in a 1987 interview, shortly after she had undergone a mastectomy, adding, ‘I had a restless spirit that kept drawing me to new adventures.’ ”

As President Johnson put it: “Liz would charge hell with a bucket of water.”

Working on The Frontline
From Classroom to Newsroom